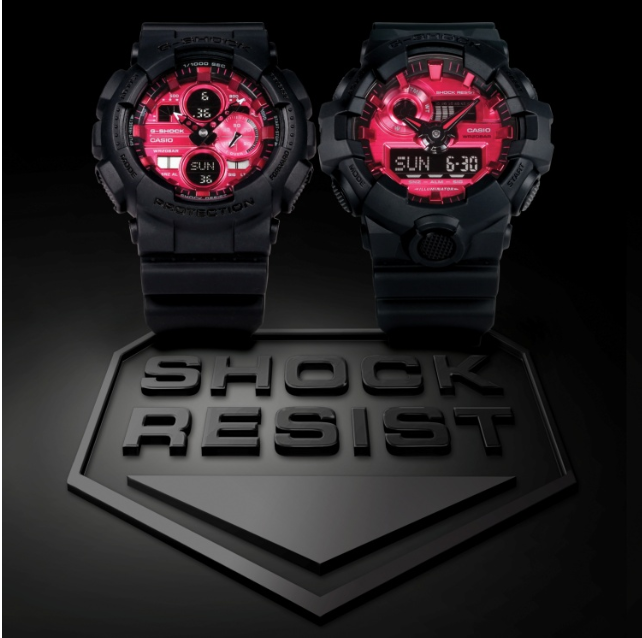 DOVER, NEW JERSEY, OCTOBER 16, 2019 – Today, Casio G-SHOCK announces the all-new, Adrenaline Red Series of men’s timepieces. The line-up is made up of three unique watches in matte black cases and bands with striking red watch dials and displays, making them the perfect accessory during the dark winter months.
G-SHOCK’s most popular digital and analog-digital models have been chosen to feature this updated style; the GWB5600, GA140, and GA700 case shapes.
The mid-sized GWB5600AR-1, G-SHOCK’s origin case, has a red-tinted reverse LCD digital display. It includes additional premium technical features like G-SHOCK's Multi-Band 6 and Bluetooth® connectivity for two-way time sync functionality, as well as Tough Solar Technology rendering it capable of self-charging even with low light conditions.
The GA140AR-1A boasts a large case design with an updated dial that includes an analog speed indicator, as well as a magnetic resistant module. The third introduction in the series, the GA700AR-1A, an extra large analog digital model with a display featuring 3D bold hands in addition to a Super Illuminator LED backlight to make it easy to read while on the go.
Each watch in the series also boasts standard G-SHOCK technology such as:
The GA140AR-1A and GA700AR-1A will retail for $110 each and the GWB5600AR-1 will retail for $150. All watches will be available for purchase starting this November at select G-SHOCK retailers including Macy’s, G-SHOCK Soho Store, and gshock.com.
About G-SHOCK CASIO’s shock-resistant G-SHOCK watch is synonymous with toughness, born from the developer Mr. Ibe’s dream of ‘creating a watch that never breaks’. Over 200 handmade samples were created and tested to destruction until finally in 1983 the first, now iconic G-SHOCK hit the streets of Japan and began to establish itself as ‘the toughest watch of all time’. Each watch encompasses the 7 elements; electric shock resistance, gravity resistance, low-temperature resistance, vibration resistance, water resistance, shock resistance and toughness. The watch is packed with Casio innovations and technologies to prevent it from suffering direct shock; this includes internal components protected with urethane and suspended timekeeping modules inside the watch structure. Since its launch, G-SHOCK has continued to evolve, continuing to support on Mr. Ibe’s mantra “never, never give up." www.gshock.com
About Casio America, Inc.
Casio America, Inc., Dover, N.J., is the U.S. subsidiary of Casio Computer Co., Ltd., Tokyo, Japan, one of the world’s leading manufacturers of consumer electronics and business equipment solutions. Established in 1957, Casio America, Inc. markets calculators, keyboards, mobile presentation devices, disc title and label printers, watches, cash registers and other consumer electronic products. Casio has strived to realize its corporate creed of “creativity and contribution" through the introduction of innovative and imaginative products. For more information, visit http://www.casio.com/home.