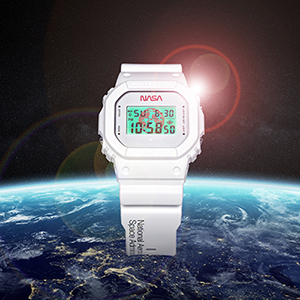 
DOVER, NEW JERSEY, April 24, 2020 — Today, the countdown begins to, All Systems Go, as Casio G-SHOCK pays homage to NASA, with a custom DW5600 timepiece, honoring decades of space exploration and groundbreaking discoveries. The timepiece arrives in all-white, with the NASA logo standing out in bright red on the watch face and an engraving of the Moon on the case back.
Additional details for the new DW5600NASA20-7CR include the American flag printed on the band loop, as well as “National Aeronautics and Space Administration" printed in black on the lower band. This limited-edition timepiece arrives in custom packaging that mirrors the theme with a view of the earth from space and a tin that is reminiscent of the space vehicles that take us there.
In addition to the introduction of this limited-edition timepiece, G-SHOCK has also created a video which can be viewed here. The video takes us on a voyage into space with the timepiece playing the role of an astronaut on board. As dramatic music plays, it provides a first look at the new G-SHOCK timepiece as well as the virtual experience of being an astronaut, from the final countdown to take-off to floating in space.
The G-SHOCK timepiece boasts the brand’s iconic square case shape and staple functions such as a Flash Alert and one-of-a-kind EL backlight that displays an image of the Moon within the digital display when lit.
The DW5600NASA20-7CR model also comes equipped with G-SHOCK technology including:
The DW5600NASA20-7CR model will retail for $130 and be available for purchase April 24, 2020 at select G-SHOCK retailers, the G-SHOCK Soho Store, and gshock.com

About G-SHOCK
CASIO’s shock-resistant G-SHOCK watch is synonymous with toughness, born from the developer Mr. Ibe’s dream of ‘creating a watch that never breaks’. Over 200 handmade samples were created and tested to destruction until finally in 1983 the first, now iconic G-SHOCK hit the streets of Japan and began to establish itself as ‘the toughest watch of all time’. Each watch encompasses the 7 elements; electric shock resistance, gravity resistance, low temperature resistance, vibration resistance, water resistance, shock resistance and toughness. The watch is packed with Casio innovations and technologies to prevent it from suffering direct shock; this includes internal components protected with urethane and suspended timekeeping modules inside the watch structure. Since its launch, G-SHOCK has continued to evolve, continuing to support on Mr. Ibe’s mantra "never, never give up." www.gshock.com/home.