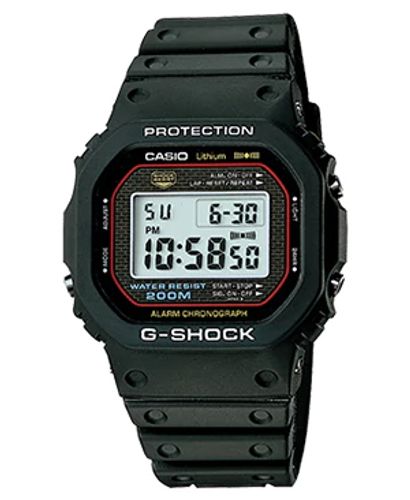 TOKYO, September 1, 2017 – Casio Computer Co., Ltd., announced today that total worldwide shipments of G-SHOCK watches passed the 100 million unit mark in August this year. Casio began selling G-SHOCK shock-resistant watches in April 1983. The development of G-SHOCK began in 1981 with an engineer’s passion to create a rugged watch that would not break even if dropped. Two years and over 200 prototypes later, the first G-SHOCK model, the DW-5000C, featuring an all-new shock-resistant construction, was released in 1983. It overturned the accepted notion of the time that wristwatches are inherently fragile and susceptible to shocks, and established a new product category: the “tough watch." Since then, G-SHOCK has continued to evolve with improved functions and performance.

* FY2018 figure represents units shipped as of end August Casio is determined to keep moving forward with the G-SHOCK brand, so that customers worldwide can continue to enjoy these outstanding watches. The aim is to ensure that every new G-SHOCK developed exceeds expectations.

On August 31, a ceremony to commemorate shipment of the 100-millionth G-SHOCK was held at Yamagata Casio. At the ceremony, a special back case engraved with the number 100,000,000 was fitted to the MRG-G1000B-1A4 in the MR-G series, the flagship series of the G-SHOCK brand.* The MRG-G1000B-1A4 is equipped with a hybrid time acquisition system that receives both GPS and radio wave time-calibration signals, conveying G-SHOCK strength in a design theme of crimson accents that evoke the red lacquered armor that once signified elite samurai.
About G-SHOCK
CASIO’s shock-resistant G-SHOCK watch is synonymous with toughness, born from the developer Mr. Ibe’s dream of ‘creating a watch that never breaks’. Over 200 handmade samples were created and tested to destruction until finally in 1983 the first, now iconic G-SHOCK hit the streets of Japan and began to establish itself as ‘the toughest watch of all time’. Each watch encompasses the 7 elements; electric shock resistance, gravity resistance, low temperature resistance, vibration resistance, water resistance, shock resistance and toughness. The watch is packed with Casio innovations and technologies to prevent it from suffering direct shock; this includes internal components protected with urethane and suspended timekeeping modules inside the watch structure. Since its launch, G-SHOCK has continued to evolve, continuing to support on Mr. Ibe’s mantra “never, never give up." www.gshock.com.
About Casio America, Inc.
Casio America, Inc., Dover, N.J., is the U.S. subsidiary of Casio Computer Co., Ltd., Tokyo, Japan, one of the world’s leading manufacturers of consumer electronics and business equipment solutions. Established in 1957, Casio America, Inc. markets calculators, keyboards, mobile presentation devices, disc title and label printers, watches, cash registers and other consumer electronic products. Casio has strived to realize its corporate creed of “creativity and contribution" through the introduction of innovative and imaginative products. For more information, visit www.casio.com.