Free Shipping on watch orders over $99! 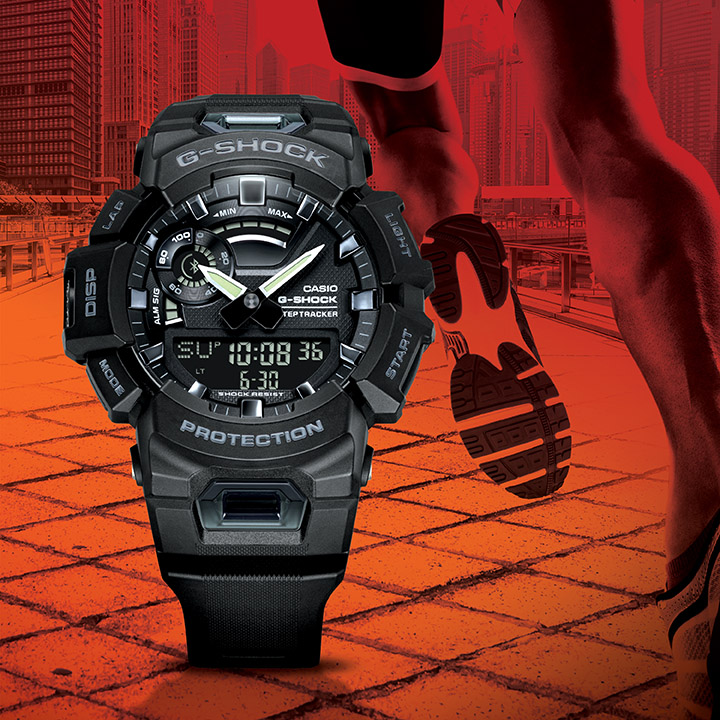 DOVER, NJ, May 13, 2021— Today, Casio announces another addition to its G-SHOCK MOVE lineup of fitness watches. The all-new GBA900 features innovative technological and design improvements, while still maintaining the same capabilities as its predecessor—the GBD100—one of the most functional and affordable fitness tracking watches G-SHOCK has ever made.
Coming in classic black or white the GBA900-1A and GBA900-7A are built with all the toughness of a G-SHOCK and come equipped with and accelerometer and Bluetooth® functionality that enable users to measure running distance, speed, pace, and calorie consumption, providing proactive and customized technology to support an active lifestyle.
The GBA900 automatically records daily movements and other data through Bluetooth® Connectivity and the G-SHOCK MOVE app. By using the built-in accelerometer, the running measurement function can log mileage, speed / pace, and calories burned. Additional features include a step tracker, a graph to display workout intensity, and an achievement graph to show progression towards individualized goals.
Design wise, the GBA900 features a slimmer case and a large LCD display area, which provides the user with increased visibility of the multi-functional digital display, while still displaying analog time. The lugs have ventilation parts to improve air exchange and moisture-wicking while the soft urethane band features multiple band holes, allowing for precise length adjustments and maximum comfort while the wearer is on the move.
As part of the release G-SHOCK has unveiled an exclusive landing page taking consumers through the features, which can be viewed HERE.
The GBA900 comes equipped with G-SHOCK technology including:

Countdown/Interval Timer (Up to 5 Timer Settings)

Both the GBA900-1A and GBA900-7A will retail for $130 and be available for pre-order beginning May 13th and for purchase on May 19th at select G-SHOCK retailers, the G-SHOCK Soho Store, and gshock.com.

About G-SHOCK
CASIO’s shock-resistant G-SHOCK watch is synonymous with toughness, born from the developer Mr. Ibe’s dream of ‘creating a watch that never breaks’. Over 200 handmade samples were created and tested to destruction until finally in 1983 the first, now iconic G-SHOCK hit the streets of Japan and began to establish itself as ‘the toughest watch of all time’. Each watch encompasses the 7 elements; electric shock resistance, gravity resistance, low temperature resistance, vibration resistance, water resistance, shock resistance and toughness. The watch is packed with Casio innovations and technologies to prevent it from suffering direct shock; this includes internal components protected with urethane and suspended timekeeping modules inside the watch structure. Since its launch, G-SHOCK has continued to evolve, continuing to support on Mr. Ibe’s mantra “never, never give up." www.gshock.com.
About Casio America, Inc.
Casio America, Inc., Dover, N.J., is the U.S. subsidiary of Casio Computer Co., Ltd., Tokyo, Japan, one of the world’s leading manufacturers of consumer electronics and business equipment solutions. Established in 1957, Casio America, Inc. markets calculators, keyboards, mobile presentation devices, disc title and label printers, watches, cash registers and other consumer electronic products. Casio has strived to realize its corporate creed of “creativity and contribution" through the introduction of innovative and imaginative products. For more information, visit www.casio.com.